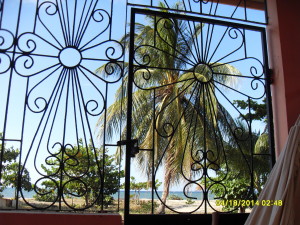 I was born in a little fishing village on the north coast of Honduras. My family immigrated to US when I was almost four. I grew up in NYC, attended Catholic schools, went away to university, and have lived all over the northeast, south, southwest, St. Louis, and now in the SF Bay Area.

I came to CA for a gig in the software industry during the late-90s boom. The job ended in January, a little over a year later. It was a very cold winter in the northeast. I decided to stay in California. I have blossomed here.

I wrote this piece during a trip to my native village. I spent a month having some maintenance done on my house. My house is a modest adobe house on the very spot where I was born. The Caribbean Sea is my backyard.

It’s Only Sand and Water

It rained so hard last night inside and outside that I began to envy Noah. At least he got a warning. To top it off, the power went out, my laptop battery finally died, and I was powerless to soothe myself with gentle music, inspiring song, or the opportunity for deep, reflective journaling. I looked forward to morning. Surely the sun would come out and the power would be on.

It got worse. The tarps that the roofers had secured to the back part of the house gave way. It was raining buckets into the kitchen and bath beneath that section of roof. I began to doubt God’s promise to Noah – no more water.

I have an unreasonable number of pots and buckets. I positioned them strategically to catch rain. The containers failed to be enough to hold back the flooding in my kitchen and bath. I could barely sleep, dreading the mess I would have to clean up in the morning.

It wasn’t yet 7 when I heard the roofers hammering and the sound of water pouring. I got up to open the door so that they could get their tools, locked inside for safekeeping. The roofers were bailing water, by the bucketful, from the roof tarps. The kitchen was as bad as I feared. Overflowing pans, muddy floors. … I went back to bed.

My rest was disturbed by my roofer calling to me. More money! Irrelevant why. Since I was up, I walked to the trucha (bodega) to get a phone recarga (add money to the pre-paid calling card). As I walked back just a few minutes later, I noticed that the sun was fully out. The gently damp dirt road belied the force of the night’s rain. I returned home to face the dreaded cleanup. It is Wednesday. Last Friday, Angi (housekeeper) had told me that she would be back on Monday. I have not seen her since. Like most of the town, she is celebrating Semana Santa (Holy Week).

I opened my door. It’s as if someone had been there in my five-minute absence! The floor was completely dry. The soaked ceiling panels were almost dry. The dripping tarps, dry. The muddy floor, just a few small mounds of sand. The only work for me was the work I created by my doubt and worry. I had pans and buckets to empty. Everything would have been perfectly fine had I truly practiced my belief in God. The sun had cameth in the morning. The muddy mess of the dark, scary night was only sand and water.

The power was out for several more hours. I wrote this in my hammock on my iPhone. It felt good to write and it felt good to remember that fret and worry are always optional.